Delight Yourself in the Cape's Helderberg 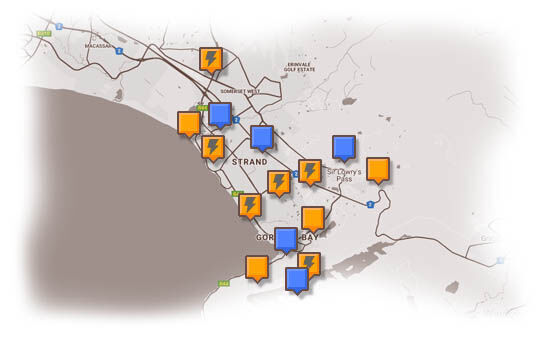 Surrounded by vast mountain ranges, the blue of which is complemented by the deep greens of the vineyards at the foothills, the Helderberg region is a picturesque hideaway. The dramatic backdrop, crisp mountain air and year-long great climate have made this a top destination for bridal couples the world over. The Helderberg consists of Gordons Bay, Strand, Somerset West, Macassar, Faure and Sir Lowry's Pass, all of which are quite centrally located with a number of sightseeing opportunities.

The first must-see spot is the Helderberg Nature Reserve in Somerset West, found on the southern slopes of the Helderberg Mountains with a view of False Bay. This 402-hectare reserve is home to the Kogelberg Sandstone Fynbos, the threatened Cape Winelands Shale Fynbos, and the critically endangered Swartland Shale Renosterveld. There are several hiking routes to choose from, ranging in length from 3 to 10 kilometres and varying in difficulty. If you’d prefer to take some time out in the fynbos, then there are several lovely picnic spots where you can watch tortoises amble by and listen to birds overhead as you enjoy your snack.

Somerset West is also working hard to save the fastest land mammal on earth. The Cheetah Outreach is an education and community-based programme which aims at raising awareness about the plight of the cheetah, currently on the endangered list. It’s believed that, from 100 000 cheetahs in the 20th Century, the population number has dwindled to just 7 100 in the wild today. Visitors can stop in and lend support to this worthwhile cause, while learning more about these incredible animals.

In keeping with nature, visitors can stop by the Helderberg Farm, home to various indigenous wildlife and with more than 100 different bird species. Helderberg Farm is also home to one of the country’s largest Mountain Candlewood trees, viewed from the hiking trail. As with so many farms in the region, grapes of the highest quality are grown here.

And if you’re in the area, then visiting a wine estate is an absolute must. Annandale Wine Estate, Bilton Wine Estate, Vergelegen Wines, Lourensford Wines, Waterkloof Wine Estate, Miravel Wine Estate, Ken Forrester Wines and Avontuur Wine Estate are just some of the well-known vineyards in the Helderberg Region.

Waterkloof Wine Estate, located on the slopes of the Schapenberg, is one of the few farms regionally to use biodynamic farming methods to cultivate its grapes. More than half the farm is dedicated to conservationist efforts to protect the Cape Floral Kingdom, recognised as a world biodiversity hotspot. Visitors to this estate will be able to witness the majestic Percheron horses replacing the modern tractor, Dorper sheep de-weeding, cows providing fertiliser and chickens used for pest control.

Another popular estate is Vergelegen Wine Estate – visited by the likes of Nelson Mandela, Desmond Tutu and even the British monarch, Queen Elizabeth II. In addition to producing some world-class vintages, Vergelegen has some 1700 camphor trees and ‘The Royal Oak’, an iconic tree planted from an acorn that originated from King Albert’s last remaining oak at Blenheim Palace.

Lovers of amateur theatre are in for a treat as Somerset West puts on some great performances at the Playhouse Theatre, the site where many well-known names started out their careers. Established in 1947, the theatre is run by one of the oldest dramatic societies in the Western Cape, the Hottentots Hollands Dramatic Society.

Then onto the seaside village of Gordon’s Bay, located just on the edge of False Bay and surrounded by the Hottentot Holland mountains. Just 40 minutes from Cape Town CBD, Gordon’s Bay has some of the best regional beaches – somewhat warmer than the Atlantic Coast – one of which is the popular Bikini Beach which has Blue Flag status. There are incredibly two harbours in this little village, one the original working harbour, home to Gordon’s Bay Yacht Club, the National Sea Rescue Institute and the SA Navy. The second – new harbour – is on Harbour Island and is home to charter boats and yachts, as well as the Gordon’s Bay Boat Angling Club. Both harbours boast a variety of wining and dining options.
View Town List
Shows all the towns with accommodation
View $elect Stays List
Shows listings offering a 15% discount to members

© Werner Bayer (License)
Beach at Gordon's Bay, the smallest of the three towns in the Helderberg area, named after Helderberg Mountain, part of the Hottentots-Holland Mountains

© Iryna Kuchma (License)
Sunset view of Gordon's Bay. It is situated on the northeastern corner of False Bay about 50 km from Cape Town and is named after Robert Jacob Gordon (1743-1795), the Dutch explorer of Scottish descent

© Werner Bayer (License)
Vineyards in Somerset West, located in the Helderberg area, about 50 km east of Cape Town and 10 km from Strand

© Iryna Kuchma (License)
Sir Lowry's Pass is a mountain pass on the N2 national road. It crosses the Hottentots-Holland mountain range between Somerset West and Grabouw on the main national road between Cape Town and the Garden Route

© Iryna Kuchma (License)
Sir Lowry's Pass was opened on 6 July 1830, and named after Lowry Cole, the Governor of the Cape Colony at the time. It has received many upgrades, particulary with regards to it being widened. The summit is at 920m